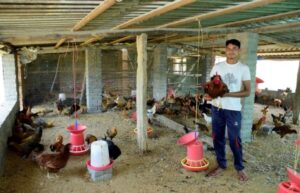 Mr. Subash Padhan age about 27yrs, of Sukhadihi VSS in Lakhanapur Block is a young and dynamic poultry farmer. Two years before during the covid -19 lockdown period he got motivated by OFSDP Ii Staffs of FMU Belpahar for taking up poultry farming as a source of income. He showed a keen interest in poultry farming and got trained on Poultry Management Techniques by A & RD departmental Staffs. Taking this as a challenge he started his Business with technical guidance of A & RD department Lakhanpur Block.

He constructed a pukka (permanent) well ventilated (good cross ventilation facility) shed (300 square feet) with adequate lighting facilities with his own cost before arrival of hatch. He has received 200 numbers of Layer chicks from A & RD department, Lakhanpur Block. Initially he invested near about Rs. 1.2 lakhs which later he received subsidy an amount of Rs. 75000 by the A & RD department, Lakhanpur Block.

FMU Belpahar OFSDP staffs were visited his shed and had a conversation to know about his experience. He    told us that A & RD department, Lakhanpur Block. has provided a great financial support to his family. Out of 200 chicks only 10 birds had died. So mortality rate was only 5 %. All the birds were broilers and immunity + growth rate was also good. According to him, at the age of 3 months’ average body weight of birds was about 1.5 to 2.0 Kgs. These   birds were sold locally at price of Rs.150/ kg i.e. Rs.225-Rs.300 per bird by him.

The floriculture is now an emerging enterprise for women SHG in industrial area like Jharsuguda. The enterprise gives more return with a unit of land than other traditional crops. For income generation, Horticulture Department, Jharsuguda promote the Women SHGs, CIG & POP to adopt floriculture more particularly marigold cultivation and provided the technical guidance in the form of training, exposure visit and demonstration.

Sri Radhakanta Patel is one of the progressive vegetable farmer of Siriapali VSS. In Every year he has cultivated Brinjal, Tomato, Lady finger, Chilli & Other types of vegetables in 0.5 acre of own land. He got motivated by OFSDP II Staffs of FMU Kolabira for taking up marigold cultivation as a better income source. He showed a keen interest in marigold cultivation and got trained by Asst.Horticulture, Kolabira Block with support from OFSDP II Staffs of FMU Kolabira. He started Marigold Cultivation with technical guidance of Asst. Horticulture, Kolabira Block.He raised 1200 nos of seedlings with his own cost and transplanted over 0.25 acre of his own land. Initially he invested near about Rs. 7000/- which later he received subsidy an amount of Rs. 1600/- by the Horticulture Department, Kolabira Block.

The dedication of the Radhakanta was apparent in their regular care. He watered the plants every three days. Only 45 days after transplanting he was harvested 30kg of marigold flowers in a week. He was able to sell their harvest at Local/Jharsuguda Market for Rs. 80/- per kilogram. Sri Radhakanta Patel earned Rs.57600/- in just 3 months.

The demand of this flower is very high during Dashahara, Diwali and other festivals, is very high. Hence retail market price of these flowers may reach up to Rs. 100.00 to 150.00 per kg at peak hours. The income from Marigold Cultivation has encouraged Sri Radhakanta Patel to adopt Marigold cultivation as profession in future. He wants to re-invest the profits and expand his marigold cultivation

Mr. Radhakanta Patel said. “Because of our dedication and the quality seeds our marigolds are blooming, just like the happiness in our lives.”