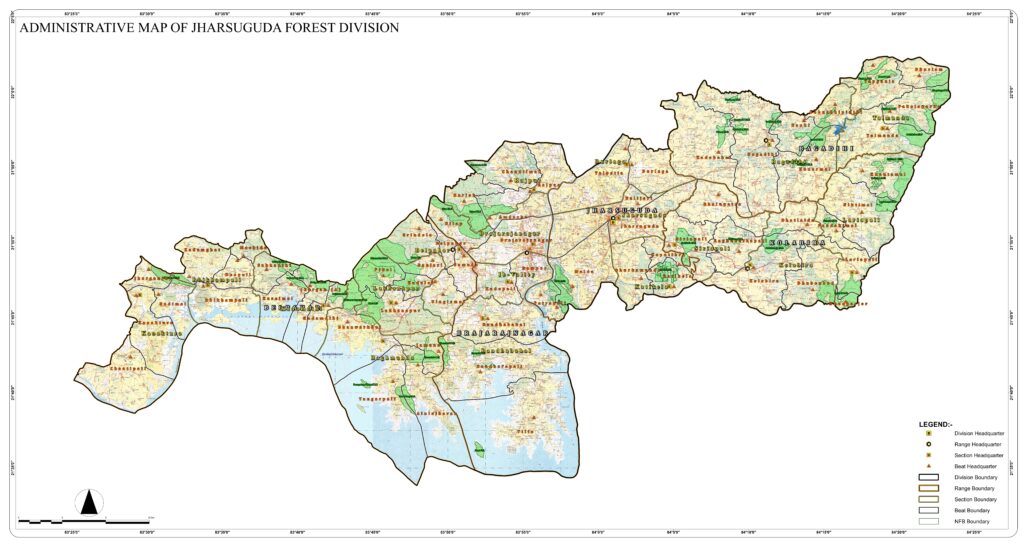 The Jharsuguda Forest Division (erstwhile Sambalpur North Forest Division), came into existence w.e.f. 01.10.2003 after reorganization of Odisha Forest Department vide Notification No IF (A)-100/2003/13220/F&E dated 08.08.2003 of Government of Odisha in Forest & Environment department and Office Order No. 557 dated 22.08.2003 of the Principal Chief Conservator of Forests, Odisha with its headquarters at Sambalpur. The jurisdiction assigned to this division is the civil district of Jharsuguda except Sodamal Panchayat with five Ranges, namely, Jharsuguda, Kolabira, Bagdihi, Brajarajnagar& Belpahar, thereby reducing the jurisdictions of erstwhile Sambalpur division (renamed as Sambalpur South division upon re-organisation) and Bamra Division to the extent available in Jharsuguda civil district (except Sodamal GP which continues to be in Sambalpur South division). The administrative set of the Division is 5 (five) Ranges, 18 (Eighteen) Sections and 64(Sixty Four) Beats.

During outgoing plan, 8 nos of Working Circles were constituted. The Revised PWPR enlightened with brief description of the forest areas with result of past system of management.

8 nos Working Circles have been proposed with justification in the draft of Revised Preliminary Working Plan for the period from 2017-18 to 2026-27. Till date the Working Plan exercise has not been completed so the forest division do not have approved working plan to continue the forestry operation. In order to have continuity in forest management this Working Scheme is proposed for the year, 2018-19.